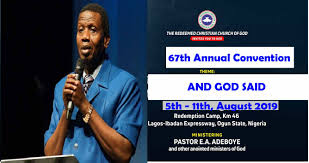 The week-long 67th Annual Convention of the Redeemed Christian Church of God (RCCG) ended on Sunday with a Thanksgiving Service, during which 1,855 full pastors were ordained by the General Overseer, Enoch Adeboye. That was 252 higher than the 1,603 candidates ordained at the 2018 Convention.

The opening prayer of the service was said by Vice President Yemi Osinbajo, who is also a pastor of the church.

Earlier in the week, the church had ordained 12,811 deacons, deaconesses and 4,060 assistant pastors.

Also during the convention, 109 babies were born at the church’s medical facility, where an Intensive Care Unit was commissioned; while 5,443 students graduated from the Redeemed Christian Bible College.

The convention, with the theme, “And God Said,” was attended by people from around the world, and watched on TV and the Internet by many more. The church has a physical presence in 198 countries.

The ordination of the pastors followed the same procedure of earlier ordinations of the church: RCCG National Overseer, Joshua Obayemi, presented the candidates for ordination to Mr Adeboye, who explained that: “Ordination into the office of full pastors is a very sacred thing because that is the highest office in the Redeemed Christian Church of God. Even the General Overseer is a pastor.”

“The ordination is the last opportunity the candidates have to request from God anything they see in the General Overseer, which they want.”

All 1,885 filed out to the altar area where they were anointed with oil and hands laid on them by Folu Adeboye and the Assistant General Overseers of the church.

That done, Mr Adeboye proclaimed: “We are ordaining you pastors in the Redeemed Christian Church of God in the Name of God the Father, the Son and the Holy Spirit.

“And in the Kingdom of God, you will not be forgotten. So shall it be! And I decree it in the Name of Jesus. Praise the Lord! Congratulations!!

The only Bible reading for the ceremony, Psalm 150, was done by Mrs Adeboye, clad in white as her husband, while the Assistant General Overseer of the church in charge of Administration and Personnel, Johnson Odeshola, preached the ordination sermon.

In his sermon, Mr Odeshola challenged the newly ordained pastors never to despair as they go about the task of evangelizing the world for Christ.

He reminded them that preaching the gospel message remained a task that must be carried out by all Christians as they await the second coming of the Lord Jesus Christ, saying “and we have an assurance that God is with us and is strength we can rely upon no matter the tides that may blow our way.”

He said rewards await every faithful minister in heaven.

“Set your mind on the things above, and endure for the joy set before us,” Mr Odeshola said.

Before Mr Adeboye mounted the pulpit for the Vote of Thanks, David Kuo thanked him and his wife, Folu, on behalf of the church for all they do to ensure the success of the conventions, including prolonged fasting and praying.

Giving an overview of the convention, Mr Adeboye noted that it had been a remarkable success. And while thanking God for it, he praised the congregation. “Thank you all again, you are the best and I am proud to be your pastor.”

He also thanked all those who had contributed to the success of the convention.

“I want to say that the Lord has spoken and All will be well,” he prayed.